Press release: A potential screening tool for learning difficulties in schoolchildren: As simple as pressing a button 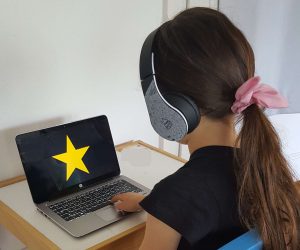 How do you tell if a young child is on a good trajectory for their cognitive development? An estimated 17% of children have at least one developmental disorder that affects their global cognitive abilities. Early intervention strategies are widely recognized as the best course of action. However, such strategies rely on early and reliable identification of at-risk children, that typically involves lengthy neuropsychological assessments with tests of attention, memory, language, and executive functions. Moreover, how could we foster any normal development, or sustain cognitive development?

In a study published today in Scientific Reports, a team of Swiss scientists from the University Hospital Center and University of Lausanne (CHUV-UNIL), the University of Applied Sciences Western Switzerland – Valais (HES-SO Valais), and the University of Geneva (UNIGE) shows how a simple task performed on a laptop (easily transferrable to a smartphone) can already inform about the child’s memory and cognitive abilities. This simple task required children to do nothing more than press a button whenever they saw a flash of light or heard a sound. At times, each was presented alone, and on other times – the two appeared simultaneously together. Still, all the children needed to press a button whenever they saw or heard anything.