In a joint effort, core and affiliate members of the CIBM Signal Processing Module in collaboration with the CIBM associate members from the Translational Imaging in Neurology (ThINk) Group headed by Prof Cristina Granziera,  Basel University and University Hospital and researchers from University of Pennsylvania and Siemens Healthcare AG, has led to the research article, “Multiple sclerosis cortical and WM lesion segmentation at 3T MRI: a deep learning method based on FLAIR and MP2RAGE”  published in the Elsevier journal NeuroImage : Clinical Volume 27 on 30 June 2020.

Highlights of the paper

Along with the paper authors have released the source code and pre-training models, with the aim of being fully open science and open source. The code can be found here: https://zenodo.org/record/3932835#.Xwcpwi1h3BI

The presence of cortical lesions in multiple sclerosis patients has emerged as an important biomarker of the disease. They appear in the earliest stages of the illness and have been shown to correlate with the severity of clinical symptoms. However, cortical lesions are hardly visible in conventional magnetic resonance imaging (MRI) at 3T, and thus their automated detection has been so far little explored. In this study, we propose a fully-convolutional deep learning approach, based on the 3D U-Net, for the automated segmentation of cortical and white matter lesions at 3T. For this purpose, we consider a clinically plausible MRI setting consisting of two MRI contrasts only: one conventional T2-weighted sequence (FLAIR), and one specialized T1-weighted sequence (MP2RAGE). We include 90 patients from two different centers with a total of 728 and 3856 gray and white matter lesions, respectively. We show that two reference methods developed for white matter lesion segmentation are inadequate to detect small cortical lesions, whereas our proposed framework is able to achieve a detection rate of 76% for both cortical and white matter lesions with a false positive rate of 29% in comparison to manual segmentation. Further results suggest that our framework generalizes well for both types of lesion in subjects acquired in two hospitals with different scanners. 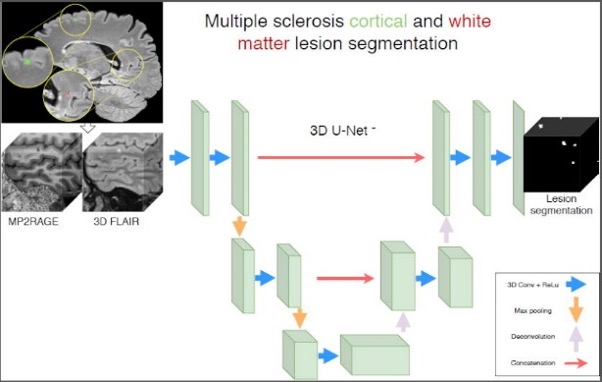