Thursday November 14th was the annual “Journée Oser tous les Métiers” (JOM) – a day that aims to introduce students from grades 7 to 9 to a non-cliché profession, without limiting themselves to traditionally female or male sectors. 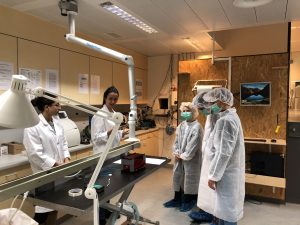 For this occasion, the CIBM opened its doors to three young boys, ages 10 to 12, who were eager to discover the world of biomedical imaging. They started their day with a visit to the CIBM Animal Physiology team lab followed by an examination case where they had to keep track of a rodents’ heart rate, body temperature, reflexes and general state during anesthesia. Thanks to their notes and observations, they were able to adapt key measurements to ensure the rodents’ well-being before, during and after the examination.

The young boys then attended two École Polytechnique Fédérale de Lausanne (EPFL) JOM seminars before discovering the world of Magnetic Resonance Imaging (MRI). During their introduction to the MRI 7 Tesla machine, they were shown how the machine works and the type of images it can create for scientific purposes. They were also given the opportunity to scan and visualize, in real-time, the inside of a pineapple and pomegranate.

Overall, the three boys got a deep dive into the CIBM and left with a better understanding of the center and the Animal Imaging & Technology section.