The 25th seminar of the CIBM Breakfast and Science Seminar Series was held on May 31, 2022, featuring a presentation by Tomas Ros, titled: Combining EEG microstates with machine learning to identify brain states and traits. Tomas Ros is Research Staff Scientist CIBM EEG (HUG-UNIGE). 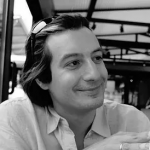 Abstract: EEG microstates have been traditionally used to estimate group-wise differences between clinical populations and/or behavioral conditions. In this talk, I will present our recent attempts to use EEG microstates in the machine learning context, in order to classify individual brain states and traits. I will begin by introducing a novel framework involving a spectral decomposition of microstate dynamics, which significantly expands the informational space available for machine learning. This approach will be validated in the context of brain state classification, both behaviorally (e.g. eyes open vs eyes closed) and in clinical populations (e.g. post-traumatic stress disorder). Finally, I will discuss how such EEG microstate measures can be deployed in a closed-loop setting with the goal of training particular brain states in real-time, also known as neurofeedback.

About the Speaker: Tomas Ros graduated with an honors in physics BSc degree from Imperial College London. His PhD at University of London was focused on therapeutic applications of brain-computer interfaces, namely closed-loop neurofeedback. During this time, he pioneered the use of transcranial magnetic stimulation for probing neurofeedback-induced plasticity, demonstrating changes in excitation/inhibition balance after a single training session. During his first postdoc at the University of Western Ontario, he helped develop an EEG neurofeedback protocol for reducing levels of mind-wandering, which was underpinned by connectivity changes within intrinsic brain networks. This led to several translational studies of this protocol in patients with post-traumatic stress disorder (PTSD), revealing positive effects on well-being. He then moved to the University of Geneva, first collaborating on projects involving neurofeedback for post-stroke rehabilitation. He is presently research staff scientist at the CIBM, leading a team investigating the impact of neurofeedback on attention-deficit hyperactivity disorder (ADHD), affiliated with NCCR-Synapsy and the Functional Brain Mapping Lab..

Revisit past seminars and stay tuned for the exciting CIBM Breakfast and Science Seminar Series upcoming this year.